It happens too often that the interpretation and argumentation of Slovenian courts is formalistic. This means that it is too literal, limited to the literal meaning of the legal text, and takes less into account its broader aspect, such as its purpose, goal, context, systemic aspect. The real opposite of this is the argumentation of the Court of Justice of the European Union (CJEU), which, as a “constitutional” court, is otherwise understood much more broadly in terms of legal problems. This, for example, can be seen in the way that our courts take the case law too formalistically and, on the other hand, ask the CJEU for an interpretation of EU law matters that they could resolve on their own. The purpose of the project was to show in concrete cases from the case law of our courts how a broader view (perhaps functionalist or instrumental) on the solution of a legal problem is also more meaningful, high quality and, ultimately, more correct. An excellent theorist of legal argumentation, Prof. Tuzet from Italy, who presented ideal argumentative approaches and also an excerpt from Italian legal argumentation, participated in the project.

Participants in the project and expected guests from practice were:

The Jean Monnet Module included 14 lectures and tutorials per year (7 each semester). These took place in Ljubljana and Nova Gorica. In the first semester they took place mainly within the subjects Philosophy and Theory of Law, Comparative Law and Large Legal Systems in Master’s Studies, Theory of Law in Doctoral Studies, and in the second semester they were organized as an additional activity of the faculty (also in the afternoon between 16:00 and 20:00). Attendance at the lectures was free, as tuition was covered by the European Commission. There were 30 study places available, which were divided among the registered candidates according to their merits and professional qualifications.

BENEFITS OF THE MODULE FOR PARTICIPANTS:

The participants of the Jean Monnet Module gained knowledge about the case law and legal argumentation of the CJEU and about the application of its case law in national law. At the end, each participant received a prestigious Jean Monnet Module certificate, which brings an outstanding reference to an individual’s CV, recognized throughout the European Union. Each participant who is a master’s student at the European Faculty of Law and has demonstrated attendance at least 40 hours of lectures and tutorials has been recognized an elective course in postgraduate study in the scope of 6 credits. 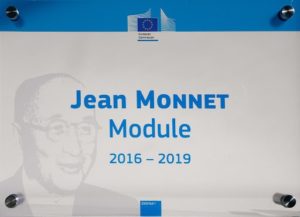