Polona Tratnik expresses her passion for creativity through various media; as an extremely sensitive and sensitive artist, she touches on many fields, in parallel with art projects in the field of biotechnology (37° C, Hair, Microcosm, Unique, Hair in Vitro, Initiation), she paints and writes novels, short prose, poetry, lyrics, and dramatic texts. She takes photographs and has been interested in music since the early childhood. She is involved in art and its engaged role in modern times. She is interested in the issues of art’s intervention in other social spheres, interrogates and analyses various fields of communication, the relationship between the artist and the work of art, the role of the viewer as a subject and their spatial presence.

All of us who were surprised by Polona Tratnik’s latest paintings, as we know her primarily as a scientist in the field of art philosophy and a biotechnological artist, should remember the thought of art historian Sir Ernst Gombrich who said that surprise and wonder are the result of the biological function of art, which keeps us curious and addresses our ability to accept the new and unusual.

A turn in Polona Tratnik’s creativity is not a typical post-modern turn. Painter and researcher Leonardo da Vinci, encyclopaedists of the Enlightenment, actors of the Art Nouveau movement under the influence of the development of microscopy and microbiological research, which can be visualized on the mantle of Klimt’s portrait of Adela Bloch-Bauer (1907) – artists throughout history have often been fascinated by modern scientific discoveries or they were educated scientists themselves, such as biologists and geologists. Research in biotechnology and neuroscience has also triggered a strong wave in contemporary art, which is looking for its raison d’être.

Recently, Polona Tratnik has been invited by the painting to listen to it and re-establish a dialogue with it. In this turn, we might have found ourselves in a similar position as spectators at the end of the nineteenth century in front of the Édouard Manet’s cult painting, Breakfast on the Grass (1862–63). The painting was shocking because of the illumination of social and sexual roles in the then bourgeois environment, represented by both male figures in perfect bourgeois attire, discussing very boring things apparently. Among them sits a naked woman, not a goddess, not Olympia, who spontaneously stares into the viewer face to face, like the naked truth. Something within the established and routine habits of the time had obviously changed so much that a kind of visual mutation of the painting was needed to accommodate the further development of modern painting.

However, Polona Tratnik is not interested in the aestheticization of microbiological forms, cells, viruses and bacteria, which in their forms and structure offer themselves for further artistic creation. Her view in front of the image avoids the inclusion of optical aids and techniques, such as the use of a microscope, perspective, and other models of visual thinking. She gently touches the painting, waiting for it to speak to her and responds to it. Unlike the processes of control and management, Polona Tratnik’s painting means opening, mindfulness. For her, painting is a creative medium that enables a way out of the apparatus society and genuine contact with the pulse of life.

Polona Tratnik’s extremely energetic paintings, created in the last two years, are on display to the public for the first time. They are passed on. They are open to reflection and wonder. 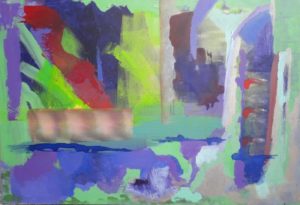